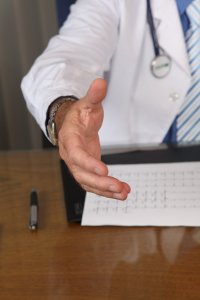 I recently attended an assessment for NHS Continuing Care Funding, the person being assessed was an elderly person who had severe dementia and other healthcare issues.  They had been for a long time in a residential home and had deteriorated over the time that they were there.

NHS Continuing Care assessments look at all the needs of the person and the nurse assessors can offer advice, support and suggestions for how the person should be cared for and often do.  They will suggest that previous assessment done by some of the specialisms within the NHS are updated, if there is a health issue that is no longer such an issue, yet the medication for it persists, for example.  Often when people are first diagnosed with dementia and they already have other healthcare issues, it is often the other issues that have the bigger impact on them.  So when someone has minor memory problems, but major mobility issues and keeps falling over, them falling is more important than forgetting that they have already bought milk.  As time goes on, this balance of what issues are key will change, as their disease progression changes, so an updated assessment by an expert for a particular need is of value.

However at this recent assessment, there was a focus on the placement, as the district nurse was coming to the home to support the carers and asked them how they were managing and had concerns about the carers response.  This issue then raised concerns and the NHS Continuing Care assessment shifted priority from looking at the persons needs in relation to that assessment to advising the family that the person needed to be moved to a nursing home.  The family were resistant, as they wanted their loved one to stay in the familiar home, surrounded by carers who knew them well and where they were stimulated by the activities.

Since the messages were being mediated through me and I held my position that it was the decision of the Health and Welfare Attorney and not the NHS or Social Services decision, but that the attorney should listen to the opinions of what is being said and why before they make a final decision.  Having full information is the best basis for making a good decision!  Still the persistence of the need to move was suggested, even after it was first rejected, so to resolve the issue of the various parties not discussing the situation together at the same time, I asked for a discussion meeting to be convened.  The issues were raised, resolved and the insistence on moving to a different home was ceased, which was creating stressful pressure on the family members.

The focus then went back to whether they were eligible for NHS Continuing Care Funding and how this person’s needs could be met and if there was any further support or advice on optimising the persons quality of life.  In the end it was a good result, but was tricky for a while and needed good advocacy to get the result and to relieve some of the pressure that was felt by the family.