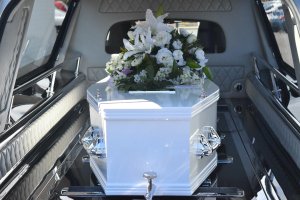 I arranged my mother’s funeral.  She had spoken to me about who she wanted to invite and importantly who she did not want to come.  I asked her about which pieces of music she would like and she said that I could choose.  I at least had some direction from her about what she wanted.  I have also arranged funerals for clients when there is no-one else to do it and I always try to find friends or family to have input and get support from the funeral director to try to make sure that the service happens in a way that is sympathetic to what the person would have wanted.

I have been asked to arrange a private funeral, with no service, as this person does not want anyone to know they have died, as they are concerned that their family will attempt financial abuse and they want the administration of their estate to be progressed far enough to make that difficult.  The sad part of this request is that no-one gets to say their goodbyes, but the executors have a duty to the estate and to minimise the risk of financial abuse, for the benefit of the beneficiaries.  It is the responsibility of the executors to arrange the funeral.

A funeral director told me recently that funerals are becoming more personalised, that people choose all sorts of aspects of their funeral service, which for the funeral director creates challenges that they have to deal with, but that they recognised they were able to give better service to their clients with this ability to personalise the funeral.

For those with religious beliefs, there are some protocols to follow for some religions, which might include washing the body by the family, choosing what they wear, to include some religious regalia or the timing or means of funeral, some require burial and some cremation.  Ensuring that the person has a religiously appropriate funeral is part of the work done to ensure that this funeral is right for them.  They can still have other aspects personalised, such as requests as to who will be the paul bearers and what the attendees will wear.

If there is a wake afterwards, this can be personalised even more, it could take place in a high end hotel and have tea and finger sandwiches or their favourite pub and be have beer and chips or anything other place or menu options that would fit the wishes of the person.

The key thing to remember is that as well as dealing with the body that has been left behind of the soul that has departed, it is an event for the mourners.  It is about them remembering collectively and saying goodbye.